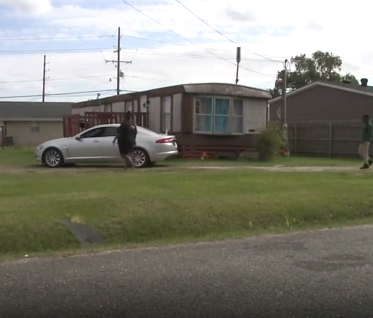 A 12 year-old girl allegedly battered her six month-old baby brother to death at this house in Luling, Louisiana (Pictures: WWLT)A 12 year-old girl has been charged with murder over claims she bludgeoned her six month-old baby brother to death. The suspect, who has not been named because of her age, is said to have killed her infant sibling at their home in Luling, Louisiana, on Sunday.
The children’s aunt Nicole Brown, who used to babysit them, said afterwards: ‘He was perfect. He was a beautiful baby, and she loved her brother. She loved her brother.’ St Charles Parish Sheriff’s Office has refused to confirm how the baby died, except to say the killing had not involved a ‘dangerous weapon.’
Sources told WWL-TV that the youngster had been fatally struck.Emergency responders called to the family’s home discovered the baby was not breathing, and rushed him to his local emergency room. Efforts to revive him proved unsuccessful, and he was declared dead shortly afterwards.
St Charles Parish Sheriff Greg Champagne called the baby’s killing ‘a horrific and tragic situation.’ An autopsy ruled the baby’s death as a homicide, with his sister now charged with first-degree murder. New Orleans defense attorney Gregory Carter said the charge was too severe for a 12 year-old girl.

To view this video please enable JavaScript, and consider upgrading to a web
browser that
supports HTML5
video

He told Nola.com: ‘To believe they’re culpable and capable of making the kind of decision that would warrant a first-degree murder charge seems like overkill.’ The alleged killer child is being held at a juvenile detention center.
If convicted, she will face a ‘juvenile life sentence,’ which under Louisiana law means imprisonment until she turns 21.
Brown has called for understanding and sympathy for her family in the wake of the horrific tragedy. She said: ‘This is a mother who’s lost two children, not just one.
‘That’s both of her children. People are very, very judgmental. But sometimes, you’ve got to look within. It could be you tomorrow.’
Get in touch with our news team by emailing us at webnews@metro.co.uk
For more stories like this, check our news page